I am unsure if you have seen this Chinese traditional cold cut appetizer. You may have seen this in some Teochew restaurants or you may have accidentally found something like this in the container of overnight braised pig trotter inside the fridge. You may be wondering why your braised pork trotters gravy solidify  like a piece of cake. Well, it is due to the collagen of the pork stock primarily extracted from the pork skin. 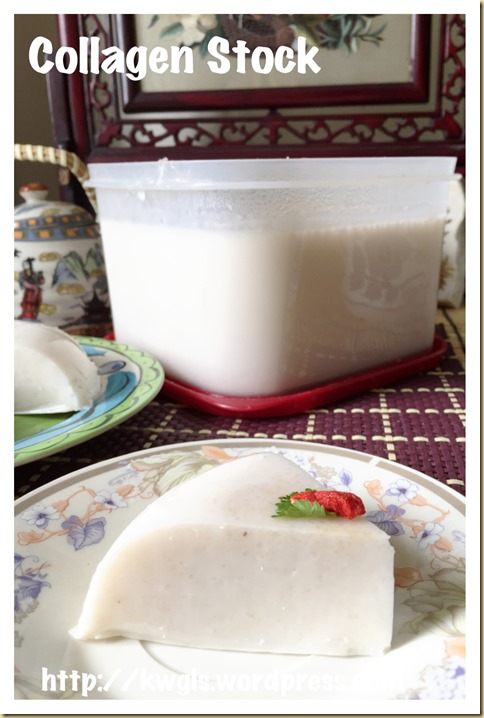 What is collagen and is collagen good for health? There are many collagen supplements sold in the health supplements stores and it is a non disputed fact that collagen is good for the body. It nourishes your skin and enhance joint flexibility. If you are interested to know on the advantages of collagen, how to prepare collagen at home instead of buying from the supplement stores, you can refer to this post: Homemade Collagen Stock (胶原蛋白） or just click on the pictures above.

This recipes works the same way that after long boiling of pork trotter, the collagen are  collected and it solidifies when it is chilled. This is a traditional Teochew appetizer and the more common name nowadays is pig trotter jelly or 猪脚冻。 I can’t find any background information of the pig trotter version but there is a detail write up on the another version, pig head “dumpling” 猪头粽 that uses some pork hock and pig face meat. I also believed the current version served in the restaurant possibly originates from the pig head dumpling.

As per Chinese Baike, it was written that;

I have ever tried that the Chinese imported pork head dumplings, but I still prefer the local version which has a friendlier taste and suits the local taste buds. The local version is also not as springy or chewy as compared to those imported version. Well, it is my personal taste bud and may be other readers will like those version commonly found in Thailand and China.

Is this an exclusive Teochew or Chaozhou recipe? It is not exclusively Chaozhou as there are many similar types of meat jelly worldwide. However, since it is titled as Chaozhou, the spices are those commonly used by the Chaozhou households. In the Western world, there are dishes like aspic , headcheese and brawn that uses the same concept of preparation.

Even within the Chinese cuisines, apparently the Zhenjiang (镇江）has a very famous cold dish Zhenjiang Headcheese (镇江肴肉）. Goggle  will show you lots of information about this almost similar cold dish. The difference is that it is whitish and vinegar is added to the broth and it is served with ginger stripes . For the Teochew version,  the most common sauce used is the combo of   chopped garlic-vinegar-chilll.

This is a very free and easy recipe. You can vary the types of meat cut needed, the spices used or the quantity of each spices. What you need to ensure is the broth must be concentrated enough to be able to set when chilled at the fridge. No recipe will be able to tell you exactly how concentrated should the collagen be or how thick is your broth.  You are generally advised to rub some broth on your hand and see if it has a jelly like stickiness.  Don’t worry, even if it does not set on your first night, you can take out and re-boil the broth for a longer period and that is how you can salvage your failure.

I do not know how many readers know that the common ingredients gelatine that are used for cheese cake making or other sweet desserts are partly made from pig skin . Most gelatine are not halal because of this unique main ingredient. By the same logic, if you want it to be fool proof and success on your first attempt, one cheating way is to add some gelatine sheets or powder to the meat broth to increase the concentration so that it is springy enough.

Though this is the cheating way, but I seriously believed that this may be used in the commercial such as restaurants. For this recipe, I have been aggressive enough to use much more pig skin than most other recipes, yet I still cannot produce the same springy texture like those served in the restaurant. As I continued to boil for a more concentrated broth, my broth became cloudy though  the chewy texture is obtained. But those jelly served in the restaurant is crystal clear yet springy. What puzzling me is with that crystal clear type of broth, how can it become so chewy?  Though in this illustration I did not used commercial gelatine, I will still list it out as one of the ingredients to let the readers decide but it is considered as optional.

The next question is what chopped meat can be added? There is one container I used all the pure lean meat from the pig trotter and for the other container, I used some lean meat with the pig skin. My verdict is the one with the pig skin is definitely more delicious with better texture. The meat fibre just does not blend well with the jelly like surrounding but I will leave the decision to the readers. In fact, Taiwanese only used pork skin to prepare the entire dish without any lean meat at all.

You must be wondering if it is healthy to eat pig skin. Well, pig skins are not fat. They are just another type of meat tissue. It is inevitable that there are some fats that comes with the meat, do not worry, after you pour in the broth, all those that floats upwards are fats. After chilling, these fats will solidify and you can just scope it away. What is left are pure collagen stock and rest be assured that you will not feel the oiliness of the dish.

Though the ingredients are humble, but it was usually served at higher end Teochew restaurants and some families in Taiwan are preparing this as a Chinese New Year must have dish. It looks difficult to do but in fact, it is one of the easier recipes that need not much skills. Remember that you need not to throw jelly if it refused to set. Boil and re-boil or adding gelatine are the salvage methods. I am unable to give you a detail measurement of how much water be used as that will depend on the size of your pressure cooking pot and the size of your pig trotters.