I have decided update some new pictures to the post since I issued the post 3 years ago. Note that 2016 winter solstice falls on 21st December 2016

Winter Solstice Festival is a few days away and will fall on 22nd December 2013. On the day, most Chinese will have the habit of eating Tangyuan or glutinous rice flour balls. In my clan, it basically mean that winter had arrive, time to get ready for the arrival of a new year in the next spring. Of course, Tangyuan were also served in a number of occasions and festivals such as wedding ceremony and 15th day of the first month of Chinese New Year.

For my international readers, I would like to quote the Wikipedia’s definition of Tangyuan:

“Tāngyuán (simplified Chinese: 汤圆; traditional Chinese: 湯圓; pinyin: tāngyuán), a homophone of and frequent metaphor for family-union (simplified Chinese: 团圆; traditional Chinese: 團圓;pinyin: tuányuán) is a Chinese food made from glutinous rice flour. Glutinous rice flour is mixed with a small amount of water to form balls and is then cooked and served in boiling water. Tangyuan can be either small or large, and filled or unfilled. They are traditionally eaten during Yuanxiao, or the Lantern Festival.[1] They are also traditionally served during the Chinese Winter Solstice Festival(Chinese and Japanese: 冬至; Korean: 동지; Vietnamese: Đông chí) (Pinyin: Dōng zhì), (Rōmaji: Tōji), (Romaja:Dongji), or, any occasions of family/relatives re-union such as wedding ceremony with both the paternal and maternal family.” (Source: http://en.wikipedia.org/wiki/Tangyuan_(food))

Very frankly, I do not know exactly what to write for this post. It is not actually a recipe as most households will know how to prepare Tangyuan. In addition, there are more and more Tangyuan sold over the counter with all types of fillings. I have decided to prepare these Tangyuan as a respect to the Chinese Traditions and as a blogger, I must at least have a post on this special Chinese cuisine. I have resorted to the preparation of the most basic traditional Tangyuan that my mum used to prepare. Basic in the sense that there is no filling and prepare for the purposes of praying ceremony. When I was young, my mother will grind the glutinous rice grains and prepared these simple Tangyuan early in the day of the Festival for praying to the Gods in the temples. There were usually only two colours, white and red.  80% were prepared in white bigger balls whereas the remaining 20% were prepare in red smaller balls.  During praying, the bowl was full of white Tangyuan and topped with a few red smaller Tangyuan. After the praying in the temple, my mum will prepare some sweet soup for the Tangyuan and everyone in the family were compulsory to have at least one bowl of sweet soup tangyuan to signify you have aged for another year and time to get ready for the next year. Usually, the syrup is flavoured by ginger and pandan leaves.

There were still lots left. On the next day, she would re-steamed some and sprinkled with white sugar.

If there were some peanuts in the house and she had the time, she would prepare sugar peanut powder and let us sprinkle on top which exactly like muah chee or mochi.

On the third day, chances were she would pan fried the tangyuan and sprinkle sugar on top.

If my late date saw that there are lots of tangyuans left, he would prepared this savoury tangyuan usually with either tang-O or napa cabbage.

Therefore, we never wasted any tangyuan though it is simple. Then most families are poor and no food were thrown.

Servings: 20-30 balls of Tangyuans depending on size 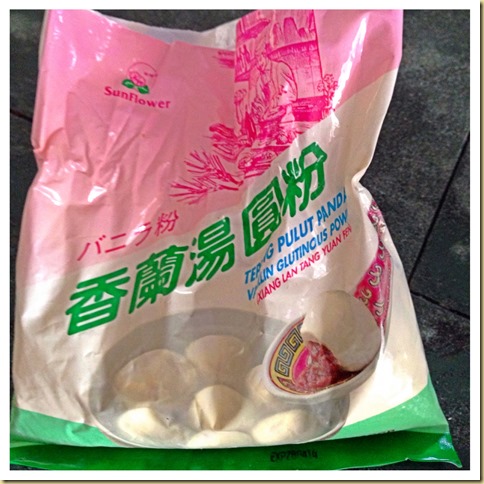 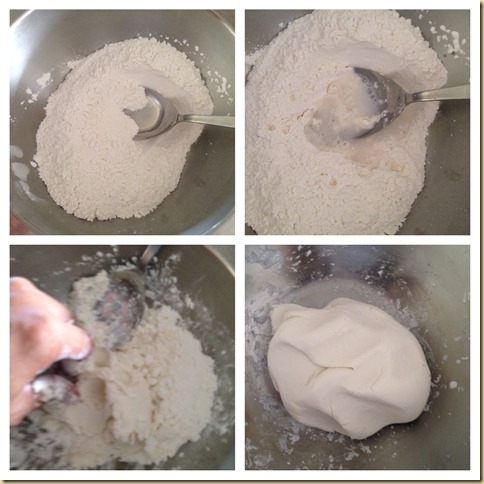 There will no picture for this savoury Tangyuan. The preparation is exactly the same as the preparation of Napa Cabbage soup. You can refer here for the recipes – Chinese Cabbage (Napa) Soup ( 大白菜汤). Put some Tangyuan in the hot boiling Chinese (Napa) Soup, boiled for 2-3 minutes and can be served as a meal replacing rice or porridges.

I was rather surprise that my kids love the savoury Tangyuan than the sweet Tangyuan. This post is a simple post and most family may know how to prepare these Tangyuan. Nothing to shout about but the intention of preparing these no filling Tangyuan in my prescribe size and colour serves as a respect to my late mum and our clan’s traditions. Hope you like the post today and have a nice day.