I have decided to upload some more pictures for the batch that I prepared today. I do not think there is any fault in the recipe but it does not look like what is commercially being sold because we do not have the special wooden mould.

These mould is like a tofu mould and with this mould, one can press it compressed. Without these mould, that is the best I believed homemade can do. Don’t be deterred, taste is exactly the same.

When I prepared this Nonya Kueh, I was unsure about its name. After my preparation, I started to Google for the name, I typed in the name “nonya Kuih” and perform an image search. I saw one image that looked quite similar to the kuih that I have prepared, tracing back to the source, it was labelled as “Pulut Tai Tai” – literally translated as “Mrs’ Glutinous Rice Cake”.

Hmmmm, it is really too many names that it confused me… But for this post, I will stick to the special name of Pulut Tai Tai.  Until now, I am still unsure how the name Pulut Tai Tai arises, and if any readers know about the origin, I would be appreciate if you can share with me.

However, if you want to know how to make the coconut jam, I do have a simple, quick and easy recipe here:  Homemade Nonya Kaya . You can either click on the link or the picture below. 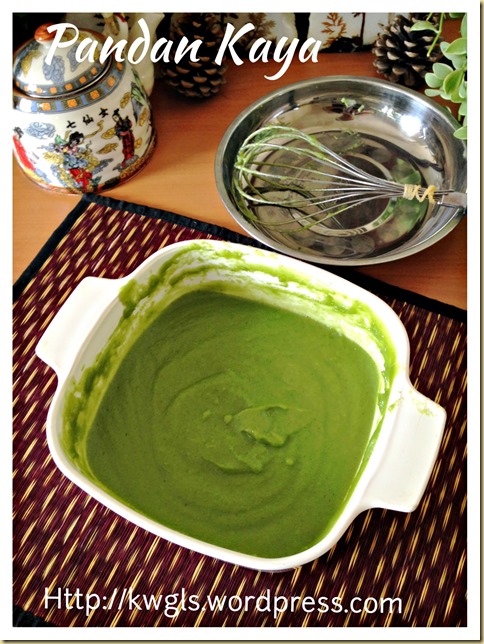 With the advent of modern kitchen technology, I have used rice cooker to cook the glutinous rice and this had cut short the preparation time tremendously. As for the kaya, I have resorted to outsource from the stores for this illustration.

This cake is still not perfect as far as I am concerned. It is still not as compact as what I desired.   As for the colour of blue pea flower,  I would hope to have a darker blue shade. However, as I can only get a small handful of about 20 flowers from the neighbourhood of which I have reserved 5 for my picture taking.. therefore effectively, I only used 15 flowers. However, in order to get a nice darker share, at least 30 flowers are required.

Don’t doubt about the colouring of this kuih, it is natural colouring from the famous blue pea flower or “bunga telang” as in Bahasa Malaysia. Juices from this flower were extracted and used in the preparation of many Peranakan cuisines. As per Wikipedia:

“Clitoria ternatea, common names including butterfly-pea, blue-pea, and cordofan-pea, is a plant species belonging to the Fabaceae family. The flowers of this vine have the shape of human female genitals, hence the Latin name of the genus “Clitoria“, from “clitoris“. (Synonyms: Clitoris principissae.). In Southeast Asia the flowers are used to colour food. In Malay cooking, an aqueous extract is used to colour glutinous rice for kuih ketan (also known as pulut tai tai in Peranakan/Nyonya cooking) and in nyonya chang. In Kelantan it is used to colour white rice for Nasi Kerabu..” (Source: http://en.wikipedia.org/wiki/Clitoria_ternatea)

Servings: Prepared about a tray of 6”x6” square tray of Pulut Tai Tai

This is a simple easy peasy recipe for you to try out.. Nothing to shout about.

Though simple, I am sure most of your family members or your guests will be impressed by what you have done.