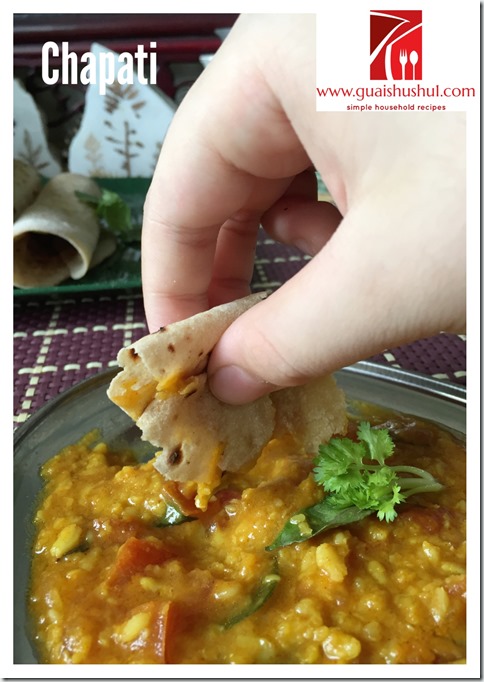 Usually when i frequented Indian Mamak stores or Indian restaurants, I have never order chapatti though I have heard so much about it.. I usually ordered roti canai as in this post: Roti Prata, Roti Canai, Roti Paratha , Roti Parotha (印度煎饼，手抓饼, பராத்தாவை ） 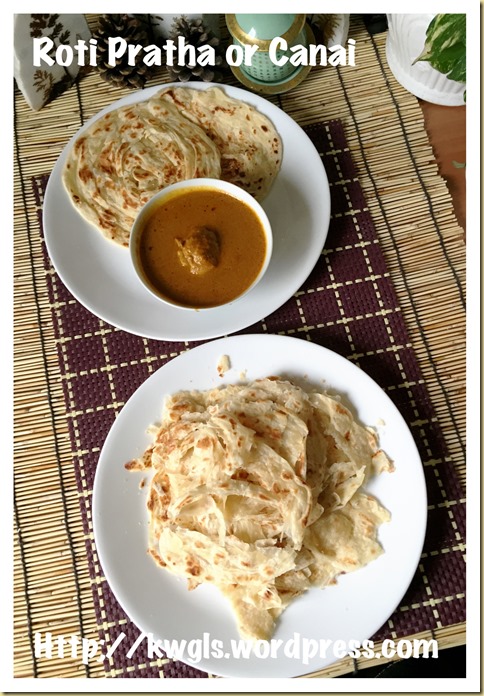 At times, I ordered the famous naan as in this post: Garlic Naan Bread (蒜香印度烤饼） 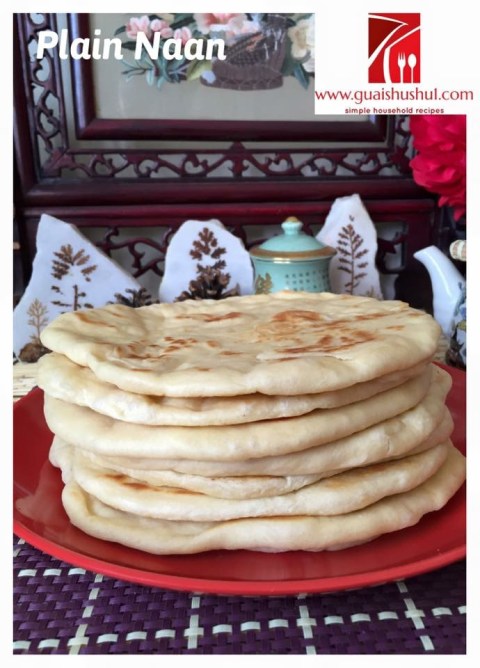 If you are interested in the above two recipes, just click on the blue colour link or images above.

I did not order chapatti due to my own prejudices. Due to the colour and burnt mark, it does not look delicious to me.. In fact i am thinking it will be hard and chewy as the bread is very flat unlike naan that looks fluffy and does not look crispy like roti pratha.  Well, I have to say it loud and clear again, it is my prejudice and I have definitely change my mind set after I prepared some this morning.

Then you must be wondering why am I trying this recipe? Well, it is because one of a Chinese reader’s requested that she wanted the recipe because she found that It is very delicious. Due to her request, I suddenly felt the urge to try preparing it and see how chapatti taste like .. Since I already have naan and roti pratha recipe, why not have another famous Indian roti recipe?

Just like any other world famous cuisines, there are lots of recipes in the internet.. Most if not all the recipes stressed on the point : Soft . Some Indian bloggers even said that it is a dream that new Indian bakers who learn to prepare chapatti always hoped that the chapatti will be soft. She is trying to say that though it is easy, without proper handling, the outcome can be an extremely chewy and hard chapatti.. I second to this opinion. What she said happens to many pan fried Chinese pastries such as spring onion pancake as well. If not properly done, it is totally not delicious.. Even tortilla have the same problem..

After reading many recipes, I ended using none from the internet.  They all used water ratio of 50% – 65% . Instead I have used what is recommended in the packaging instruction.

I proceeded to prepare and I did not know what to expect from the chapatti. When I took the first bite, I change my perceptions instantaneously. Though the taste of the bread had nothing unique but the texture was well beyond my expectation. It was very soft and I have three pieces to go with the dhal curry that I have cooked. If you are interested in the dhal curry, you can refer to this post: Classic Indian Vegetarian Curry–Lentil Curry aka Curry Dhal (印度扁豆咖喱 பருப்பு குழம்பு）. It really goes very well with dhal.

I believed the special texture of chapatti is due to the special flour : Indian wholemeal flour or Atta flour. It has a rather high protein ratio of 15% and almost all the recipes require the use of this flour.  I have get my atta flour in the Indian provision shop near my apartment and I presumed it can be easily bought in supermarkets.

“Atta is an Indian wheat flour used to make most South Asian flatbreads, such as chapatti, roti, naan and puri. Most atta is milled from hard wheat varieties, also known as durum wheat, that comprise 90% of the Indian wheat crop, and is more precisely called durum atta. Hard wheat have a high gluten content, which provides elasticity, so doughs made out of atta flour are strong and can be rolled out very thin.” (Source: https://en.wikipedia.org/wiki/Atta_flour) 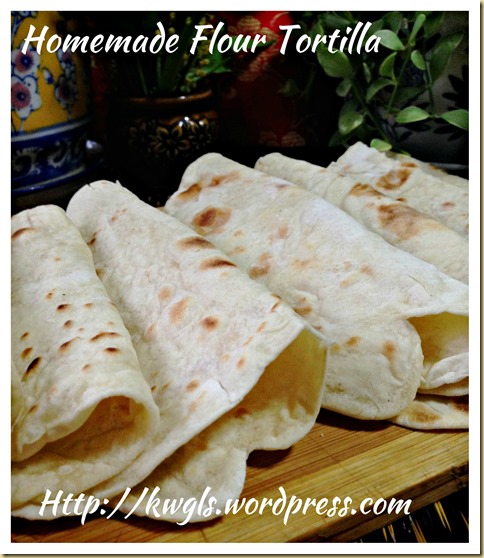 You may asked what will happen if you can’t get hold of atta flour, can you use plain flour?. Well, if you are using all purpose flour or bread flour, you will be changing this recipe to tortilla recipe as in this post: Homemade Flour Tortilla (墨西哥面粉烙饼）. While I was preparing the chapatti, the tortilla post kept flooding my mind.. The way of preparation is so similar with tortilla.. Is it not worldwide cuisines are all inter related?

“Chapati (alternatively spelled chapatti, chappati, chapathi, or chappathi, and also known as a roti) is an unleavened flatbread from the Indian Subcontinent; and popular staple in India, Nepal, Bangladesh, Pakistan, and Sri Lanka. The word chapat (Hindi:चपत, chapat) means “Flat”, which describes the traditional method of forming rounds of thin dough by slapping the dough between the wetted palms of the hands. With each slap, the round of dough is rotated. Chapati is noted in the 16th-century document Ain-i-Akbari by Abu’l-Fazl ibn Mubarak, vizier ofMughal Emperor Akbar. Chapatis are one of the most common forms of wheat bread which is staple food in South Asia. The carbonized wheat grains discovered at the excavations at Mohenjo-Daro are of a similar variety to an endemic species of wheat still to be found in India today. The Indus valley is known to be one of the ancestral lands of cultivated wheat. Chapati is a form of roti or rotta (bread). The words are often used interchangeably. Chapati or rotta is made of whole wheat flour and cooked on a tava (flat skillet).” (Source: https://en.wikipedia.org/wiki/Chapati)

After preparation of the 3 Indian common roti, I am of the opinion that this is the easiest and the healthiest.. If you realized, there are only 3 ingredients not even a drop of fats was used. It has a high fibre content that is good for digestive system.  Remember that you need to give time of resting such that the flour has adequate time to absorb water.. If prefer, you can even leave it overnight just like many bread dough recipes. There is another roti recipe, puri is on the pipeline. It uses atta flour too but it is a deep fried version.