I got a request from a reader to issue this recipe which is a very common recipe during Chinese New Year Period. When you saw that cured meats are sold in the supermarket, it signifies that Chinese New Year is approaching.

Chinese cured meat can be in the forms of pork or fish or duck or even chicken. The more common type of cured meat sold in Singapore is Chinese sausages and during Chinese New Year, cured pork belly, cured duck and cured ham are also being sold. Not all cured meat are created equal, some are tasty but some are totally not suit my taste buds. I have tasted many type of cured meat and personally, i preferred Hunan style of cured meat which is most aromatic. But in Singapore, there are not much choices, it was dominated by a few companies and what I have tasted today is quite different from the type I have eaten in China.

In Chinese, cured meat is called 腊味 (la wei aka lup mei) and some people or even manufacturers translated it as wax. Personally, I do not think that this is correct as the word 腊（la or lup) does not refer to wax but an ancient deity that Chinese people were praying. Huge scale praying to this “la” deity was carried out in the 12th lunar month during the Xia dynasty which was about 2000 years ago. Therefore the 12th lunar month is called 腊月 (la yue ).  Meat cured or preserved during this month is hence called 腊味 （lup mei or la wei). Therefore, the word la being used has nothing to do with wax but the month of preparation. I am explaining this because some may think that the meat was preserved using wax..

You may be asking why the meat was preserved or cured during the 12th month causing it being termed as la wei? Well, during the olden days, meat was not a common item in daily menu due to tough living conditions. Families in the villages usually only slaughtered 1-2 pigs just before Chinese New Year. That was the time to celebrate the hard work paid off in the previous year and welcoming the new year. There is a term for this yearly slaughtering and it is called “sha nian zhu 杀年猪”. It was an important event for many families and after the pigs were slaughtered, it was distributed to relatives and some were used in the new year. However most of the meat would not be able to finish consuming and a huge quantities of meat were being cured during this month and this cured meat would provide protein sauces for the coming year.

I have watched many Chinese documentaries and apparently, the traditional method of curing meat is very simple. Meat was only being rubbed with salt and various types of herbs and spices. The meat were then hung near the roof of the house where it was indirectly smoked by the stove in the house. It can then be eaten after a few months and the meat can keep for years if properly cured.

This method of eating lup mei is a Cantonese style and apparently, in Malaysia, instead of using the different type of lup mei, only chicken meat and Chinese sausages were used and that is what is commonly known as claypot chicken rice (瓦煲鸡饭）（Recipe: “Clay Pot (“?”) Chicken Rice?– Cooking “Clay Pot” Chicken Rice Using Rice Cooker). After researching many recipes, the recipe is very similar to the recipe above including the seasonings. 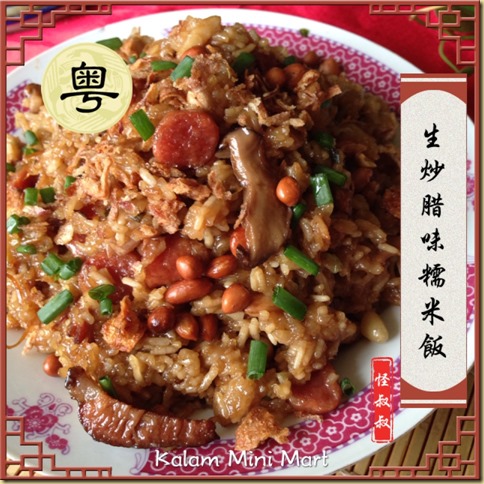 There is another version of lup mei fan which was also a famous Cantonese cuisine but used glutinous rice instead. This glutinous rice version is very commonly sold in the restaurant but the taste is totally different for both types. This recipe yields aroma similar to the claypot chicken rice and the glutinous rice version taste more like the Hokkien baby full moon glutinous rice as different types of side ingredients was used. If you are interested in that version, you can refer to this post: Stir Fried Glutinous Rice Dish (生炒腊味糯米饭）.

I am contemplating whether i should share with all the authentic claypot version or rice cooker version. I ended up decided to share the rice cooker version which is more practical for families nowadays as most families does not have a claypot. In addition, it is much faster and easier to prepare.

I have nothing much to conclude and possibly I would like to highlight is that some cured meat can be really very tough. In this case, you will need to steam the lup mei until soft. Not only it is tough to eat, you will not be able to even slice it and steaming will incorporate the moisture back to the meat.